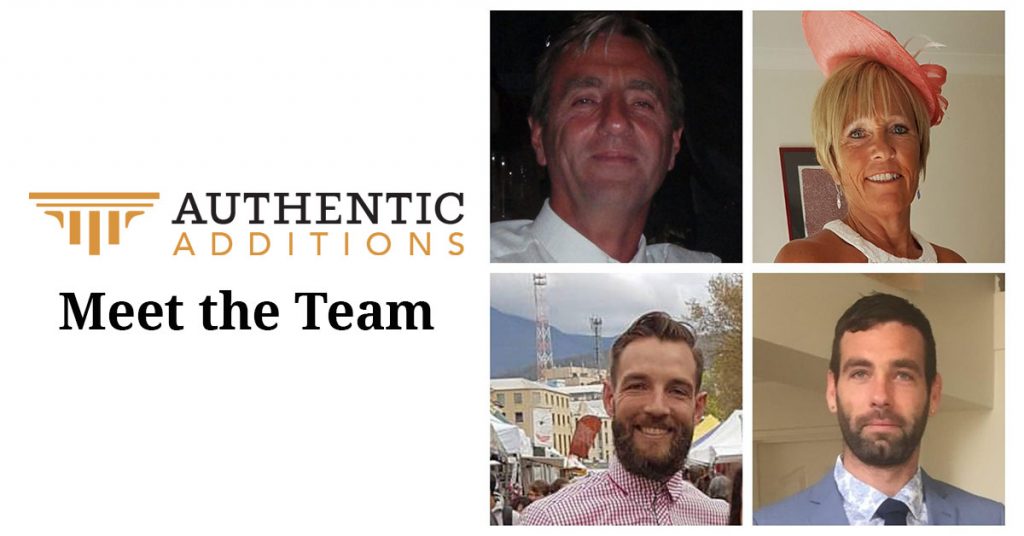 The Authentic Additions team is family run, with 40 years of experience in ceilings and repairs. The whole family arrived in Australia in 2002 on Australia day. So here we all are.

Andy is the brains behind Authentic Additions, he’s a do-er, and a problem solver. There’s nothing DIY he can’t turn his hand to, and everything HAS to be done perfectly to meet his discerning standards. He’s worked on the Sultan of Brunei’s residential palace, Bander Seri Begwan, Gatwick Airport, the ornamental ceilings of Harrods in London, ceilings and archways in Langham’s Hotel, London, suspended ornamental ceilings in palatial homes in the UAE and large shopping centres in the UK.
Andy is a West Coast supporter (Diane says he’d look better in purple), loved soccer in his life pre-Australia, and wil find any excuse to travel or get into the outdoors. Andy loves a joke or a prank, though he’s not too sure everyone gets his sense of humour, or maybe it’s the accent. Andy, Garin, and Farrell are all Coeliac, allergic to gluten containing foods.

Dianne handles everything behind the scenes, she’s the one taking on all the paperwork while the boys get their hands dirty. She’s driven, motivated, and a total neat freak with a list for everything. She attacks everything in her life with passion, enthusiasm, and a sense of fun.
Like Andy, she loves the great outdoors, though Derby day can be a bit contentious – she’s a Dockers fan. In a former life, Diane had a career in natural health, which she’s still very much involved in. Her toddler grandson is her favourite person in the world, with the rest of her family coming in at a very close second.

Garin is a plasterer by trade, taught by his dad Andy, and has worked alongside his dad and brother, Farrell, on all kinds of building and restoration projects. He’s focused recently on Gyprock projects, including walls, ceilings, and patching.
At 6’4, he’s the gentle giant of the family. He’s a doting first time dad, with another on the way late in 2021. He’s a born traveller who’s lost count of the countries he’s been to, loves hiking, and lived 2 years in Canada. He’s just completed his certifications to teach another of his passions – yoga! If he could pick one place to go right now it would probably be Africa.

At a flat 6’, Farrell is known as Short Shins. He’s the one we send crawling into small roof spaces to re-strap ceilings. He doesn’t let too much stress him out and provides a much needed cool head to the team.
Farrell is a gym junkie, a Dockers supporter like his mum, and like the rest of his family loves the outdoors. He’s been all over the world, including a solo road trip across the USA. His favourite place to go is South America. You won’t find him squishing creepy crawlies, he’s a softy at heart, and loves animals, even the ones with too many legs!

So, you see, when we say family owned and operated, we really mean it. As our name suggests, we are Authentic. We are true to ourselves, creative & passionate. There is NO hidden agenda, we keep it real and get it right.

PrevPreviousThe WORST Cornice Cracking – and What We Did About It
NextBathroom Renovation: Tiling SolutionsNext

And don’t worry, we hate spam too! You can unsubscribe at anytime.

Cracking underneath the cornice is a really ugly a

New ceiling and cornice have been fitted in this b

Time is free but as business owners, we need to be

A day in the life of our team. We may be small i

There can't be anyone better to install our cornic

Is this possibly one of the quickest and easiest h

When I look at photos of myself standing so confid

Diane Hedges from Authentic Additions will be shar

Yay....we've actually managed to get a few sneaky